This past Saturday (April 28) was International Tabletop Gaming Day. So I celebrated by, what else, gaming. I played a few new games with my regular gaming group, and here are my thoughts about them.

Vengeance – In this 2018 game, you play a hero who has been beaten up and tortured by a gang (or several gangs. Apparently, you aren’t well liked by lots of bad guys.) Now you are out to get your revenge, and you’re going to do revenge better than any other hero. The game starts with “The Wronging” in which you draft cards with a gang on it, and what sort of hurt they’ve done to you. You can play these cards (up to three) to determine the gangs you are going after. More gangs, or more cards with the same gang, score you more points, but you also start with a lot more damage you have to heal. Damage reduces your abilities, so the more hurt you are, the less effective you are. After “The Wronging” there is the first Montage, where every player rules a number of dice based on their Mind skill. These dice form a pool, which starts another draft where you pick dice instead of cards. These dice can help you with various things, from doing recon to hunt down the boss of the gang you want, to being able to heal. Coupled with these dice, you play with a hand of cards (each hero has their own deck, which indicates their specialty.) After you play three cards and combine them with the dice to resolve the effects, it’s then time for a fight. Using a number of fight dice based on your skill, you go to a location with a gang and start beating up the gang members. The gangs don’t use dice, but each different type of member has a different ability, and the bosses and henchmen have unique skills. Success scores you points, failure means you flee with your tail between your legs and get nothing. At the end of two montages and five fights, the player with the most points is the badass and winner.

That’s an overview. There’s a bit more to it, but this link will tell you more if you’re curious. I quite enjoyed this game. It combines several standard mechanics (card draft, dice draft, deck manipulation) into a unique flow which gives you a lot of decisions without being overwhelming. The bosses are unique, and recon is a must if you want to maximize your turn and score points. Just going in and fighting blind is useless if you discover the gang you’re going up against hasn’t done anything wrong to you. (thus scoring you no points). The game flows well and is fairly short. I think it took us about 90 minutes with rules explanation. The only complaint I would have is that the downtime for a 4-player game is long. There are some things you do simultaneously, but most of it is individual players, and since the gangs don’t roll dice, and you don’t interact directly against other players, your opponents have nothing to do while you take your turn. This flaw stops it from being as fun as it could be. Still, it might work really well with 2 or 3 players. I definitely look forward to playing again. Score: 7/10 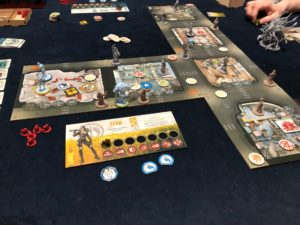 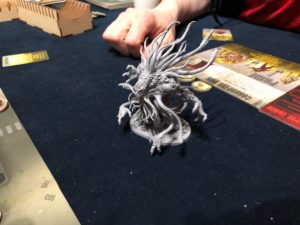 Next up was The Others, by Cool Mini or Not. This is a one against many game. One player takes the role of one of the Seven Deadly Sins. (The base game comes with Pride and Sloth, and expansions allow you to get the other five). The other players take the role of agents of FAITH, an organization dedicated to saving the world from the evil that has infested it. You have multiple goals, played out in stages. Completing one goal open a simple flowchart where you choose your next goal from two options. Completing that goal brings you to the final goal. The object is for the good guys to complete all their goals before the bad guy kills all the FAITH agents. There is an Apocalypse Track that ticks down every turn, making things worse for the heroes the longer the game goes on. If the bag guy kills all seven of the heroes, they win. The bad guy can damage the heroes in two ways, either through physical damage or corruption. If the corruption reaches a certain level, it begins to convert to physical damage. Take 5 points of damage, and that hero is dead. There is also gear the heroes can get to enhance their abilities, and there are multiple scenarios for each sin.

This game is a lot of fun. The mechanics are all fairly standard stuff and its really nothing more than a slugfest when you come right down to it. But there’s never been anything wrong with a good beat down game. One of the more interesting mechanics is that a hero can voluntarily corrupt himself, which makes him more in danger of being killed, but gives him special abilities above what he normally has. There are ways to heal corruption and damage, but they are few and far between, and you might have to fight your way through a lot of bad guys to get to them. All in all, this one is a winner and I can’t wait to get into it again, maybe next time as the bad guy 8/10.

The third game was The 7th Continent published by Serious Poulp. This is a cooperative game of exploration on a new continent populated by gothic characters. (Two of the characters in our game were Victor Frankenstein and H.P. Lovecraft). This is basically an advanced “choose your own adventure” style game with a timer mechanic where you draw cards, which indicates the passage of time, the number of successes in completing an action,  and also gives you the skills and items you need to succeed. Terrain cards show you the island. On each card are several actions, each with an associated number. You choose your action, then draw a card that corresponds with the number on the terrain card. You then draw from the skill deck the number of cards indicated (or more if you wish, to ensure success). Run out of cards in the deck, then you shuffle the discard pile,  flip it over, and start running through it again. The tension is that there are curse cards in the deck and once you start going through the deck a second time; if a curse comes up, you’ve lost.

This game is getting a lot of love from gamers, and I can kind of see it. I think I need to try it again since a glitch in understanding part of the mechanics made it impossible for us to complete the first mission, or even get close. (Hint: the game comes with a magnifier lens. You want to use this to examine the terrain cards.) The way the game utilizes the choosing method is clever, and a lot of thought was put into making the game fun, unique, and keeping things moving. It almost feels like a solo game that just happens to allow multiple players. There are no turns per-se, and everyone can discuss what should be done, even if the characters aren’t technically together. And the card timer, a mechanic from the Pathfinder Card Games, works well. All in all, an okay game that might be fun with one or two players, but having four doesn’t really add anything to it. 6/10 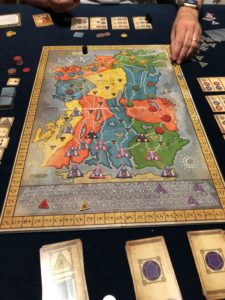 Last up was The Arrival by Cryptozoic. In this game, each player is a tribe leader looking to both gain control of the island where the game takes place (a pre-history Ireland) , while also keeping the Fomori (demon goblins) from taking over the island. The game starts with the Earning Phase. Each player draws four cards, each showing three rows of different resources. You play the cards and have to ultimately choose two of the rows to “block” thus making those resources unavailable. The upper section of the cards offers many resources, but also Corruption Points. The middle and the lower sections offer fewer resources, but also less Corruption. After that, you use the resources to both expand your lands, fortify your holdings, and also bring our Fomori to harass your opponents, or even set them up to slaughter yourself, as doing so scores you Fame Points, and the player with the most points at the end of the game wins. Unless the Fomori control the majority of the island, in which case the player with the lowest corruption wins.

This is one of those games I like to play but don’t play well. I came in third out of four in this one. The choices are few but deep, and you have to have a strategy early to have a chance to win. The theme could be almost anything, but it works well enough for the game as is. There are many other games along this line, and while this one was enjoyable, nothing made it stand out as anything spectacular. I would play it again, but I’m not going to clamor for it to hit the table. 6/10

So there you have it. My International Tabletop Day. Not the best games, and The Others was the definite winner of the day. But as always, I had a great time with my group.

Until the next game day.